It’s only been four days since A War of Our Own announced, but the reaction to it has been amazing. We are being contacted for interviews, important questions have been raised and we’ve gotten support from every corner.

We were nervous launching A War of Our Own because of its serious and controversial nature. But the overwhelmingly positive response has been a huge boost to the team. 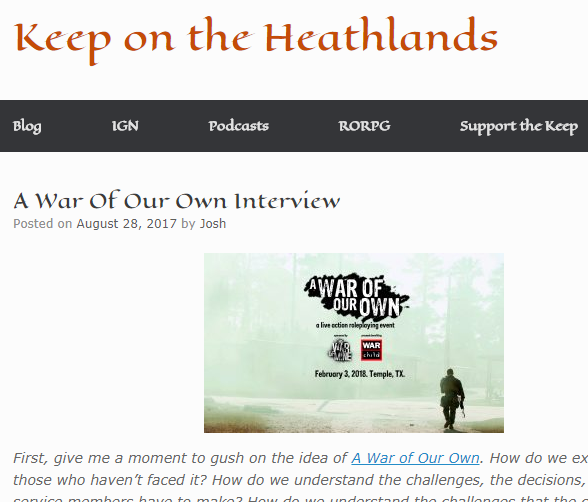 Several geek blogs have approached us over articles. We’ve given interviews and input on both of them, but just today, an interview with our organizer Matthew Webb has been published in Josh Heath’s Keep on the Heathlands. He asked some great questions about the game, what we see as our goals, and why we made some of our design choices.

For those of you who don’t know, Josh Heath has been a long-time proponents of using role-playing games to create positive change and foster education in the world.

Sam Swicegood gave us a shout-out on his blog as well, Elsewhere Nightly. Sam Swicegood is a geek journalist as well as an RPG author. Check out his blog for other articles on LARP and tabletop news, geek culture and LARPing. He’s also got an upcoming project coming out next year, the science fiction RPG Cold Start.

The original developers of This War of Mine are excited, too

One of the joys of this last few days is not only 11-Bit Studios, but the team behind This War of Mine – not to mention countless others.

I can't express how amazing it feels that This War of Mine still inspires people to do things like this. https://t.co/pYaW64Vil5

We are working on bringing on more team members, setting up the final details before ticket sales next month.

But most of all, we’re a Texan production – and our creative lead Steve Metze is currently deployed with the Texas National Guard dealing with the ongoing situation of Hurricane Harvey. You can watch him doing his work here.

Please wish him and all our friends in Houston the best – and consider donating to the Red Cross or donating blood if you are in the Texas area.

Keep up to date